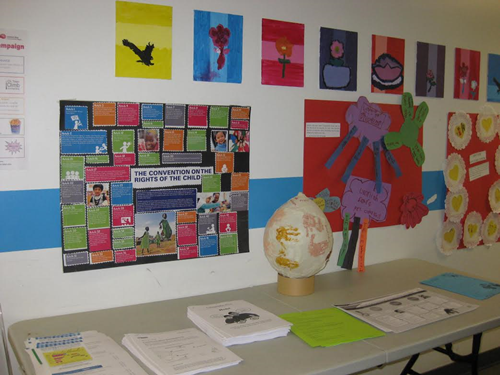 There were 14 families in attendance, consisting of 22 children and 16 adults. The energy at the centre was marvelous. All the families seemed happy to be in attendance. Our thanks to Boys and Girls Club of East Scarborough for providing the pizza dinner. We also would like to thank George Brown College for donating children’s stories to the families.

After the dinner the evening consisted of two interactive workshops. During the first workshop families were given the opportunity to talk about their favourite childhood game to play, parents mentioned one thing that was unique about their child(ren), and two P.A.C.E. Canada Board members (Colette and Candice) spoke about the importance of children learning through play.

The second workshop was about possible professionals who parents could speak with if they had concerns regarding their child’s development. The parents received case scenarios about children who may or may not have needed early intervention support. The parents were then given the opportunity to read and discuss the scenarios in a small and large group setting; with the support of the Early Childhood Educators from Boys and Girls Club of East Scarborough.

Overall it was a fun and informative evening. P.A.C.E. Canada would like to thank all of the families that attended the event along with the Early Childhood Educator Staff of East Scarborough Boys and Girls Club.