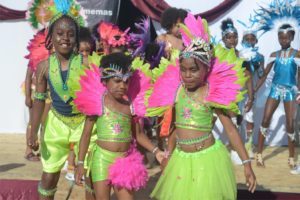 Three launches over Two days.  Close to a 1,000 kids and parents spent part of their weekend taking in costume launches for this year’s Kiddies Parade.

On Saturday and Sunday trio of Mas Camps held parties and fashion shows for junior revelers who want to play Mas this summer.  Sun Lime Mas, Louis Saldenah’s Mas-K-Camp and Tribal Carnival held free costume launches to show children what costumes they could wear in the coming July 21st Junior Carnival.On Saturday Sun Lime Mas did just what their name says.  Under a warm sun, the Kiddies Band Launch was taken outdoors onto a large wooden stage that had been built behind their St. Clair Avenue East headquarters (Kennedy/Midland).  Parents and friends sat in lawn chairs and limed while the children lunched on hot dogs and treats and waited for the show to start.  Over a dozen young children – both female and male – came out in very modest kid friendly costumes that matched the theme of “Reign” that the adults will be wearing in the big August 4th Grand Parade.  After the fashion show the children, many who had come to the afternoon event in last year’s costumes, paraded around the parking lot of the Mas Camp!
On Sunday there were two afternoon costume launches also in Scarborough that attracted over 700 children, parents and friend. 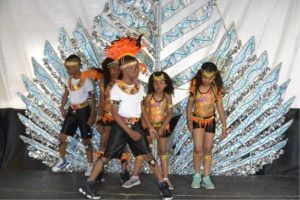 The biggest party was at the Nugget Event Hall at Midland and Nugget in Scarborough. Louis Saldenah’s Mas K Camp is held its launch on Sunday Their Kiddies Band Launch opened its doors at 12.15 with the actual fashion show – modelled by 60 kids from eight sections – started at 2.15 pm.

“It was an amazing day,” said Mas-K-Camp’s Hayden Harbin. “ We must have had 600 adults and kids in the hall over the course of the afternoon.  There were free hot dogs and hamburgers, drinks and candy floss!”

“We made it a real introduction to Carnival.” He continued.  “Wonena Harmony was our MC and the kids just loved her. We also had Tamila Matthews’ dance troupe and a pannist performing.”

Based on the registrations received on Sunday, Mas K Camp expects that they will have 800 children in costumes taking part in the Kiddies Parade.

Tribal Carnival held the last launch of the day beginning at 4pm, an hour after the end of the Mas-K-Camp party.  For carnival crazy parents, there time enough to take their kids to both events!

“Yes! Yes people! Tribal Carnival Kiddies Band Launch was held on Sunday at our camp at 3401 McNicoll Avenue in Scarborough,” wrote Dexter Seusahai. Good to “see everyone come out and support the kids launch.  Sunday the costumes designs were by Dexter and Celena Seusahai — boooommmm”.

To date five mas camps have held costume launches for the children.  There will be six more weekend parties before the July 21st Junior Carnival Parade and Family Day which will take place at Malvern (26 Sewells Rd.) and Neilson Park (7600 Sheppard Ave. E.)  in Scarborough.

(As reported by Stephen Weir, thecaribbeancamera.com)