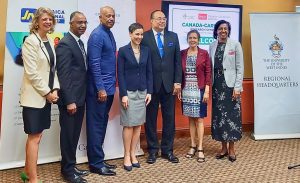 We have liftoff. This week in Jamaica, officials from Brock University and the University of the West Indies (UWI) capped off a year of collaborative planning and formally launched the Canada-Caribbean Institute (CCI).

To the acclaim of political leaders, diplomats, and academics the CCI — which will support studies and research into specific Canada/Caribbean issues — became a reality on Monday, Feb. 17 with its inaugural Canada-Caribbean Research Symposium, held at the UWI’s regional headquarters campus in Kingston, Jamaica. 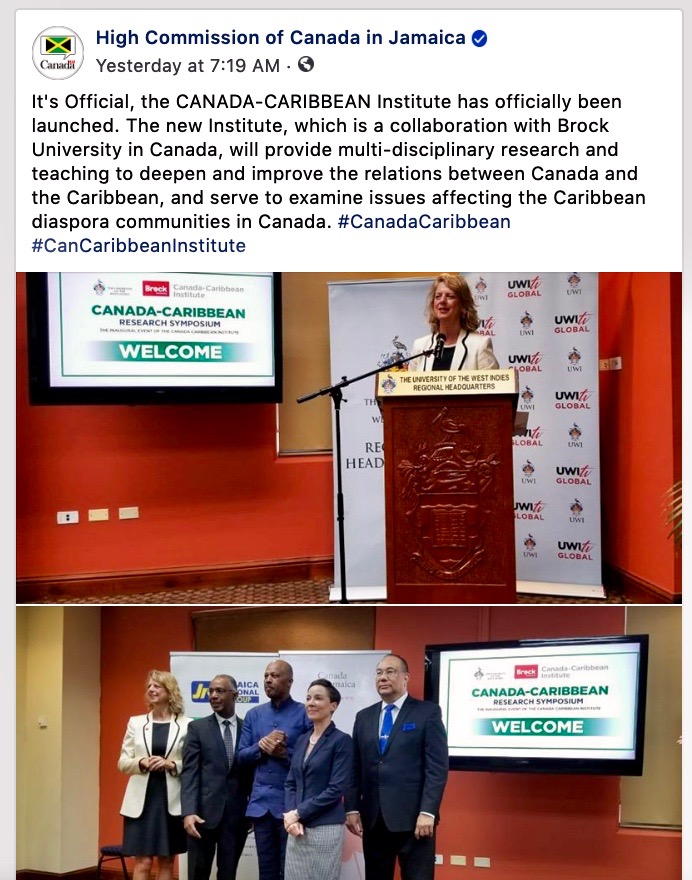 Remarks were made by Senator Kamina Johnson Smith, Jamaica’s Minister of Foreign Affairs and Foreign Trade; by Canada’s High Commissioner to Jamaica, Laurie Peters; and by UWI’s Vice-Chancellor Sir Hilary Beckles, and its Pro-Vice-Chancellor for Global Affairs, R. Richard Bernal, who is Jamaica’s former ambassador to the United States.

Brock President Gervan Fearon, a leading advocate behind the new international body, attended the symposium with a contingent of Brock researchers and officials.

Fearon has helped directly energize the new Institute by personally contributing to funding the new Dr. Gervan Fearon Scholarships. Starting in September 2020, these will be awarded annually to graduate students studying Canadian Caribbean issues at Brock. The scholarships will be awarded to a student or students from Canada one year, and a student from the Caribbean in the alternating year.

“I have had many discussions with my Brock colleagues, and we know this partnership is a wonderful opportunity for many people to collaborate and make a positive difference that creates very real future benefits both in Canada and across the Caribbean,” said Fearon.

The goal of the CCI is to facilitate collaborative academic and research initiatives; faculty, student and staff exchange programs; and institutional capacity building in areas of shared interest between Canada and the Caribbean such as socio-economic development, environmental and health promotion, gender studies, and trade and economic policy.

The Institute provides a framework for scholars in the Caribbean and Canada to conduct research and scholarly activities, and generate needed knowledge and analysis to inform innovative policy and initiatives for enhancing Canada-Caribbean relations. 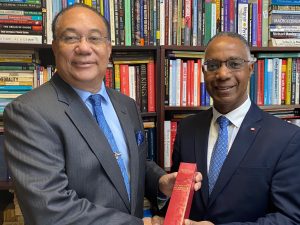 oughout the symposium this week, Brock faculty members were actively engaged in discussions that have already resulted in new research, collaboration and exchange opportunities,” she said.

The Canadian High Commission celebrated the milestone on Facebook:  “The new Institute, which is a collaboration with Brock University in Canada, will provide multi-disciplinary research and teaching to deepen and improve the relations between Canada and the Caribbean, and serve to examine issues affecting the Caribbean diaspora communities in Canada.”

During the symposium, significant economic and cultural linkages between Canada and the Caribbean were discussed by participants from both regions. Like Canada, the Caribbean is a diverse region in terms of geography, culture and language, with much to learn from and to contribute to each other.

In an earlier interview with the Jamaica Gleaner newspaper, UWI Vice-Chancellor Beckles said Canada has been “a most reliable supporter of Caribbean nation building.”

“Creative, courageous, and confident people build bridges and not walls, and the Canada-Caribbean bridge has been one of the most productive and mutually beneficial relation constructed in the last hundred years.”

Bernal, UWI’s Pro-Vice-Chancellor and one of the architects behind the new Institute, echoed that theme. 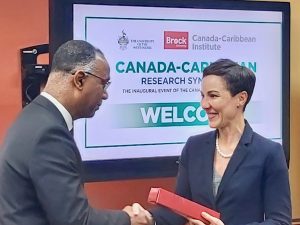 ial era,” he told The Voice newspaper in Saint Lucia. “This relationship has been reflected in trade, capital for development, tourism,

migration and remittances, as well as in diplomatic solidarity.”

With its headquarters in Jamaica, the University of the West Indies also has physical campuses in Barbados, Trinidad & Tobago and Antigua & Barbuda, as well as a virtual Open Campus that provides academic programming in 17 nations across the Caribbean.

As published by  Brock University