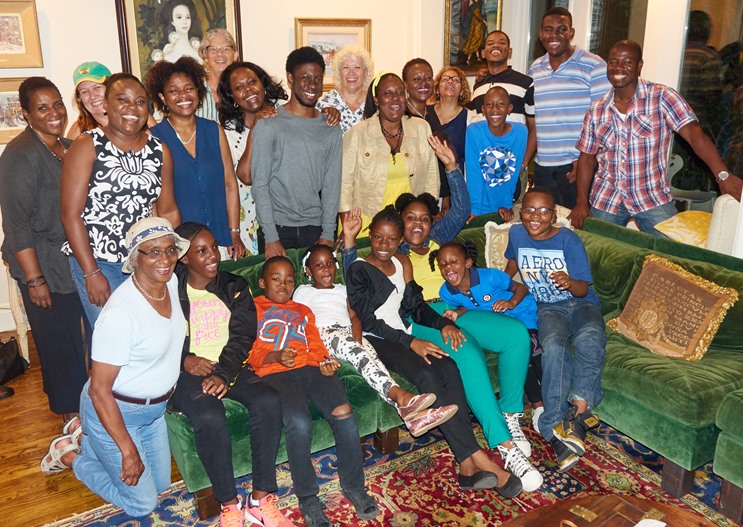 As part of the Jamaica 55 celebrations a delegation of 16 students and teachers, led by Mrs. Kandi-Lee Crooks-Smith, arrived in Toronto as ambassadors of Jamaica. Mrs. Crooks-Smith is the Principal from Allman Town Primary school in Kingston Jamaica, and recently won an award as “Principal of The Year”.

PACE Canada has adopted the Allman Town Basic School, and they we

re invited to a BBQ at the home Diana Burke, the current PACE Adopt-A-School chairperson. Diana and her husband Robert welcomed the delegation along with several PACE Canada Board of Directors, patrons, and members.

In 2009, PACE Canada donated a bus equipped with computers as a mobile lab, to Jamaica’s Ministry of Education. The initiative is

known as Tech de Bus. Allman Town Primary School is the custodian of Tech de Bus, and it is used for the benefit of students at that school and other schools in Kingston.

The visiting group comprised students of the primary school, as well as members of the community who have experience in performance and entertainment, including past students. They performed at the Jamaican Independence church service celebration, and also at the flag raising ceremony at Toronto City Hall.

A consumption of BBQ chicken and burgers, chips and vegies followed by an array of deserts including ice cream, pies, and homemade Brazilian brigadeiros and mandioca (cassava) cake was enjoyed by all. Diana had an after-dinner surprise for the group when she brought out an array of Canadian souvenirs, and everyone had a chance to pick their favourite.

Mrs. Crooks-Smith explained that her approach is to expand the use of the school buildings so that the community can benefit from its use, and that the school, in return, also gains from this experience. As an example, Sunday school and adult education classes are conducted at the school.

Additional photos have been posted to the PACE BBQ Album.

One of the other programs that have been implemented at the school enables the students to go on field trips across the island, visiting locations that are significant and relevant to their studies in the classroom. They get to visit parts of Jamaica that they would not otherwise be able to visit.

In addition to touring the island, they also travel abroad (“fi com a foreign”) as ambassadors for the brand of Jamaica. A similar delegation came to Toronto for the 2015 Pan American Games. Their teachers have observed an increased level of confidence and success rate among the students as a result of participating in these trips.

Mrs. Crooks-Smith was encouraged by Lloyd Wilks, Consul General at the Jamaican Consulate General in Toronto, to return this year. In May she made contact with the Minister of Education, Youth and Information, Senator The Honourable Ruel Reid, at the breakfast meeting during the PACE Canada visit to Jamaica. With the support of the Minister of Foreign Affairs and Foreign Trade, Senator The Honourable Kamina Johnson Smith, the team was able to finalize plans to come to Toronto.

On behalf of the PACE Canada Board, its members and supporters, we congratulate Mrs. Crooks-Smith for her vision and dedication in helping to build a brighter future for the children of Jamaica. We pass along best wishes to the team for a wonderful and safe tour as they explore all that Toronto has to offer.